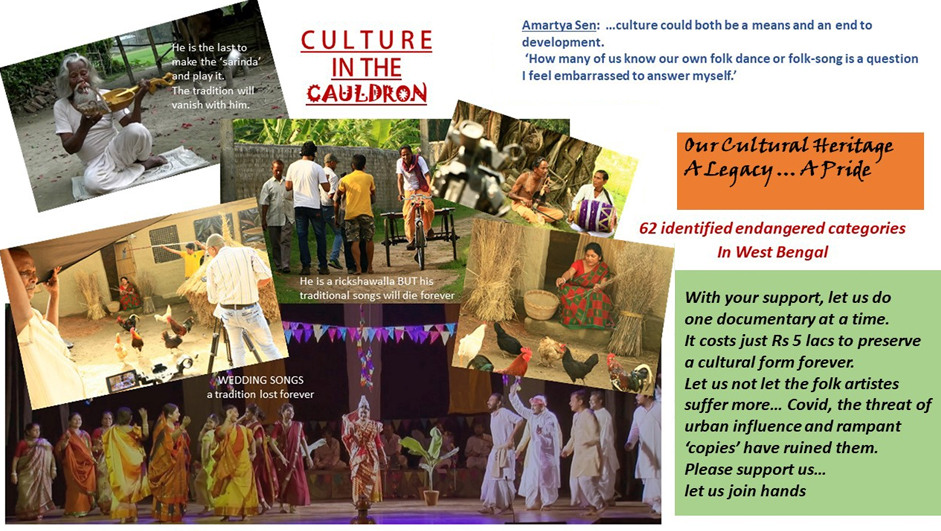 Culture in the Cauldron

Reach out to the folk artistes with hope, encourage them to perform tension free in their own locality to preserve their culture for the next generations.

This is a project that we have been working on since 1992. The grass root folk forms and arts as in songs, music, dance, artifacts are on the verge of getting completely lost. We have been audio recording such items and have a considerable stock already. We now intend to capture all the forms on video. Seeing & hearing will certainly have much greater impact. We would like to open it to the world in the form of a virtual museum. Scholars and allied subject specialists will get a chance to see, appreciate and learn, appreciate these vanishing forms of songs and the allied cultural outputs.

The traditional folk songs, Folk dances, Folk instruments, Folk art and artifacts are vanishing at a rapid pace. The city is a big pull. Rural art forms that have survived through hundreds of years are now rapidly dying. Yet, there are thousands of folk tunes that are being used in Commercial ‘Bollywood’ films in a new avatar. These even get the music directors awards. But the original form and style remain in the dark or die a miserable death. Kindly see the following links:

Folk goes to Films without any mention


It will be a matter of shame if we fail to preserve these for the future generation, the rich reservoir of folk forms that abound West Bengal. In our quest to search for and preserve the heritage of the country, we have been collecting songs in their original forms since 1992.

We propose a Virtual Museum ( web based ) that will offer anyone interested a vast resource of Folk traditions. Our initial plan is to target the 62 Forms that have been declared ENDANGERED. The virtual Museum will have distinct advantages over traditional museums for preservation and dissemination of information around the world.

We propose a Virtual Museum ( web based ) that will offer anyone interested a vast resource of Folk traditions. Our initial plan is to target the 62 Forms that have been declared ENDANGERED by the Government. The virtual Museum will have distinct advantages over traditional museums for preservation and dissemination of information around the world.

Bengal is home to many living traditions including music, indigenous dance and folk forms, beliefs and skills. Much of this heritage has been passed down from generation to generation through 'shruti’ ( hearing )and ‘guru-shishya parampara’. However, many of the traditional art forms and practices (traditional music, dance, festivals and craft, oral traditions and local languages and dialects) are fast disappearing or are being mutated into new forms. There is an urgent need to document and archive this vanishing heritage before it is lost forever. Digital documentation has become one of the most important means of preserving cultural expressions.

The proposed virtual museum will aim to:

What we have: We have a pool of resources, creative persons who will willingly take this task and deliver something worth giving to the future generation and the world. We have a director with two National & 28 International Awards for best documentaries. We have an audio recordist with 5 National Awards. Our camera team is highly experienced and motivated. It is because of their belief and dedication that our cost per documentary remains so low.

What we don't have: We don't have money to carryout and translate our dream to reality.